More information about this book, which has been getting good notices, is here:
http://retrofit.storenvy.com/collections/29642-all-products/products/17488829-our-mother-by-luke-howard

Not Quite Used to Fame


But Luke and Abby don't have this authorship thing quite down yet. Abby posted this:

So after the con [Comics Convention in Burlington VT, where Luke did a book signing for his previous book, Talk Dirty to Me], Luke and I went to Phoenix books in Burlington to check it out, and we got excited to see his book in the window. When we went inside we looked for his book but it wasn't in the graphic novel section. Luke (rightly) pointed out they must have all the copies at the con, but I thought it might be somewhere else tucked away due to some of the more explicit content.


While Luke was in the stacks, I decided to ask if they had it, which they said they didn't, they were all at the con, and they seemed embarrassed. I couldn't clarify that it's okay, I'm the author's wife, because Luke was mortified I was even asking the staff.Cut to this morning and Luke is texting one of the staff of Phoenix books who is at the con.

Doesn't seem like a major sin. As I wrote:
I don't understand why you fessed up. You actually think those reviews on Yelp and Amazon are all written by satisfied customers, without any of them being from the owner or staff? Even big writers like Stephen King do this. Now, a big writer like Stephen King can't go personally into a bookstore to see if they carry "The Shining", but he has enough money to hire minions. 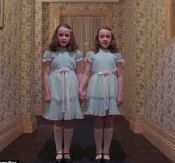 There's also this article by Brent Underwood, "Behind the Scam: What Does It Take to Be a ‘Best-Selling Author’? $3 and 5 Minutes." detailing how to game Amazon's system (or, maybe showing how ridiculous the notion of a best-seller on Amazon is).
One of Luke's fellow authors at the Center for Cartoon Studies (a man who's farther along in his career) wrote: "Oh, God, LET THEM THINK IT WAS A CUSTOMER! NEVER ADMIT TO THIS KIND OF THING!"