This posting is just a place to make my critique publicly available to those locally who've requested it. It probably won't be of general interest.

If you have a chance could you take a look at these two reports and let me know if the statistical methodology looks right. I don’t need a full review or anything like that. I just don’t have any way of knowing if they really know what they are talking about. I believe that it is all the same data that both reports are working from.

When I inquired of ActiveTrans [Chicago-based Active Transportation Alliance, a bicycling / mass transit / pedestrian advocacy group] if there were peer reviewed studies supporting the safety of protected bike lanes, they sent me a link to the People for Bikes web page: http://www.peopleforbikes.org/statistics

When I looked at what they had on the safety of protected bike lanes I found lots of stuff about people “feeling” safer, and puff pieces and memos by advocates, but this single Canadian study seemed to be the only thing that approached rigor, I think.


Full citations for this study:

Here are some comments. Note that while I am a statistician, I work in marketing research, not transportation analysis.

This is really one study, with different parts of the analysis published in AJPH (2012) or BMJ (2013).
Case crossover is a very reasonable study design, although the relative risk factors in this case are less stable than they seem. A logistic regression model (equation 1) seems reasonable.

This is an exploratory study; note in table 4 of AJPH they report 14 significance tests, two ways (unadjusted, and adjusted) at the 5% level.  Five of the 14 confidence intervals show significance (unadjusted).  The results about the same for the adjusted (which is good), and to simplify the discussion I’m just going to consider the unadjusted.

The finding that jumps out at you is that .12  odds ratio (OR) for cycle tracks, and 88% reduction. That seems huge, but we need to look a bit more carefully at this.

This is because the confidence intervals overlap. The tests show that some of these are different than the reference condition (major street, parked cars, no bike infrastructure), and some are not.  It is true that this overlapping intervals method I’m using is only approximate, but the overlap is pretty large.  Interpreting these non-differences as differences is a common statistical reasoning error. See, for example,
Gelman, A., and Stern, H. (2006), “The Difference Between ‘Significant’ and‘Not Significant’ is Not Itself Statistically Significant,” The American Statistician,60, 328–331.

3.       The cycle track difference is pretty frail.  From table 4, there are 2 accidents on cycle tracks, 10 non-accidents on cycle tracks (the control observations). While they fit a logistic model using the overall data, we can best see why this is a frail result by considering this as a binomial, like a coin flip.  Because of the way the case crossover design works, we could expect the same number of accidents and non-accidents on cycle tracks, e.g. a 50-50 split.
a.       With 12 observations and a 50% expectation, we would expect 6 and 6, but just like a coin flip we would probably see a result that varied.  A 2-10 split is (as reported) statistically reliable, but just barely so. 3-9 would not be (one more accident). 2-9 would not be (one fewer control in a cycle track).  So, if we change ONE OBSERVATION in either direction, we have NO STATISTICALLY SIGNIFICANT EFFECT AT ALL for cycle tracks.
b.      Since the control segment reflects a random choice by the investigators, it’s just luck that they picked 10, rather than 9, control segments on cycle tracks.  (In fact, doing a rough calculation there’s about a 45% chance of picking 9 or fewer controls and getting no significant effect at all.)
c.       In short, there’s a good chance this 88% reduction has some type M error in it (actual magnitude, if we were to do a bunch of similar studies, would be far less than 88%).  Again, I want to emphasize that this does NOT mean the investigators did anything wrong in their reporting or analysis.

4.       There are a couple of other quirks in this study. The accident risk was NOT higher at  intersections (OR = .96, nonsignficantly lower), which I don’t think is a normal finding. I’m used to thinking intersections are much, much more dangerous than non-intersections; I’m  pretty sure that was John Forester’s analysis. But I no longer have a copy of Effective Cycling.
Note in the BMJ article they analyze intersections and non-intersections separately.

The BMJ article uses the same data, but different controls – in fact, for some cases they use multiple controls for the same case; it’s not clear to me how  they adjusted for this non-independence, and it’s clearly harder for me to do the approximate binomial calculations. (not saying they did anything odd, just that it’s not clear how they handled the cross-case dependence).  In the BMJ article, cycle track is statistically significant for non-intersections, but not for intersections. But there aren’t any cycle track accidents at intersections here, so we’re out of data.

Overall: it’s a pretty good study, and seems to have paid careful attention to definitions, etc.  But it’s only one study, and the cycle track result seems to depend on the choice of a single, random control case.  Not much of a platform to spend millions of infrastructure money on, if that’s all we’ve got.

And, given the small data size, they obviously couldn’t distinguish the type of barrier used on the cycle track (curb, bollards, or parked cars).

SLIGHT ADDENDUM:  Instead of looking at the binomial as 2-10 versus 6-6 expectation, we could compare the observed proportion of accidents (2 out of 690) with the observed population of controls (10 out of 690). In this case, 2-9 is still significant, 2-8 is not, so this depends on a change in the random picking of 2 controls, not one.  That’s about a 33% chance, not a 46% chance.  But the general notion that this is a fragile result is still true – because it depends on a carefully constructed, but still small, data set.

I think part of the impetus for asking me to look at this was the current controversy over a protected bike lane on Dodge in Evanston, IL
http://www.chicagotribune.com/suburbs/evanston/news/ct-evr-bike-lane-criticism-tl-0804-20160802-story.html 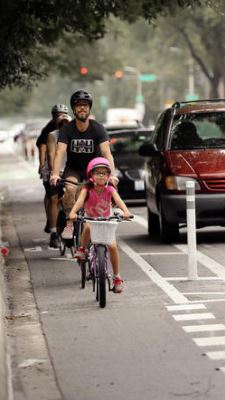